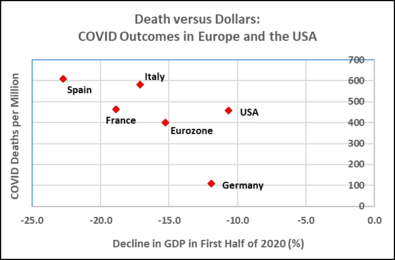 Europe has taken a much harsher economic thrashing from COVID-19 than the United States while suffering fewer deaths. How you rate the pandemic performance of these two great polities thus depends on how you value dollars versus deaths. Arguably, the U.S. has done better than Europe.

Eurozone real GDP in April-to-June 2020 was 15.3% lower than in the October-December quarter of 2019, the last period before the start of the pandemic. That was almost half again as large as the 10.7% fall in U.S. GDP over this period.

The European slump would have been much worse except for Germany, where the fall in GDP (around 12%) was only modestly higher than in the U.S.; declines elsewhere in Europe were staggering - 19% in France, 17% in Italy, 23% in Spain. (Figure 1.)

I calculate that if the U.S. recession had been as severe as in the Eurozone, American output and income in the first half of 2020 would have been $250 billion lower.  File that number away for a moment.

There you have it. If the U.S. had performed the same as Europe, it would have had $250 billion less income, but also 19 thousand fewer deaths. Put crudely, if the U.S. could have been like Europe, it could have saved lives at around $13 million per life.

That is an ethical question, of course. But economic policymakers don’t get to leave it at that and walk away, stroking their chins and musing over ethical imponderables. They have to answer hard questions, like how much to pay for some new life-saving technology. The answer is not “whatever it takes” or “infinity.”

And even that may be an overestimate, since most COVID deaths are among the elderly, who are nearing the end of their natural lives. Here the notion of the “Quality Adjusted Life Year (QALY)” could be helpful. Using a high-end estimate of $150,000 per QALY, and very optimistically assuming that most of those who die of COVID would otherwise have lived for another 20 years in good health, we get a value of $3 million, less than a quarter of the European price tag.

If you accept the ethical view embedded in VSLs and QALYs, then you could argue that U.S. COVID outcomes have been better than in Europe – so far.

A couple of qualifications:

The game is far from over. The U.S. could fall behind Europe in the months to come.

It could be that governments everywhere are merely fumbling around to little effect, while the pandemic rolls along on some complex dynamic that we hardly understand.